Bike ride pedals past half a million pounds! 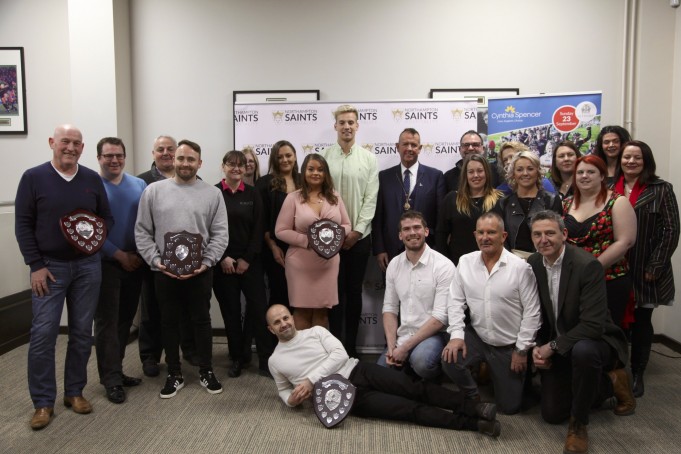 The amazing total was revealed at the launch of the fifteenth year of Cycle4Cynthia at Franklin’s Gardens and comes thanks to the £76k which was raised by the 1100 riders who took part in the ride last September in aid of Northampton’s Cynthia Spencer Hospice.

The launch also saw the presentation of the 2017 trophies, including that for the biggest team, won by Shirefit East Northants with 50 riders, and to the best fancy dress, which went to the team from Nationwide who ‘stole’ back their title after donning cops and robbers costumes!

A new award, given to the team which raised the most money, went to Northampton firm Piroto Labelling whose 36 cyclists raised more than £15k in memory of their colleague Laura Silk who passed away at Cynthia Spencer last year. The trophy was collected by Laura’s daughters Angela and Daniella.

Meanwhile the Chairman’s Cup, awarded in recognition of a special effort representing the ‘spirit of the ride’, went to Gary Wilkins, a lorry driver from Boothville who had used his training for last year’s ride to help him lose 25kg.

Speaking to the audience, Gary explained why he’d taken part: “I lost all my grandparents to cancer and my best friend’s mum passed away at the hospice so I just couldn’t imagine a better way to show my support to the care team there for the incredible work that they do.

“The day itself was amazing and I couldn’t wait to ring my Dad in Cyprus to tell him how I’d got on, so as soon as I’d collected my medal, I was on the ‘phone, telling him what a great time I’d had!” he enthused.

The trophies were presented by England Under 20s rugby world champion and Saints favourite Harry Mallinder and the Deputy Mayor of Northampton, Tony Ansell and his Deputy Mayoress, Jayne Crofts.

Inspired by the Chairman’s Cup winner, the fifteenth year of the ride will celebrate the three themes of fun, fitness and family and is now encouraging riders of all ages and abilities to jump into their saddles.

Cycle4Cynthia 2018, which is generously supported by headline sponsor EMW Law LLP among other businesses, will take place on Sunday 23rd at Althorp, by kind permission of The Earl and Countess Spencer, with 5, 25 and 50 mile routes on offer.

You can register for the ride on the ‘Register’ page of this website or for more information, including details of corporate sponsorship opportunities, call the Hospice on 01604 973340 or email info@cycle4cynthia.co.uk

Meanwhile, to keep up to date with the latest news on the event, or to tag photos from the launch, please visit and ‘like’ the ride’s and Hospice’s page on Facebook.