Cyclists with lots to crow about! 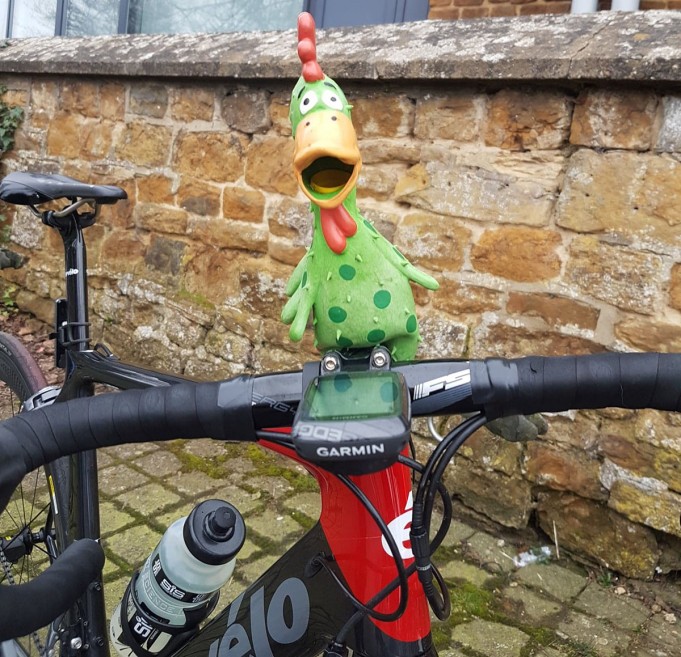 The Cobblers call on Clarence, the Saints boast Bernie and the Steelbacks swear bv Steeler to summon their fans’ support but they’re not the only sporting teams in the county with mighty mascots!

You see Colin the Cockerel is the emblem of cycling club Brixworth Velo and while his fellow cheer-raisers might perform a vital task for their respective professional sides, the plastic bird has a rather more light hearted role to play among Velo’s lycra-clad pedallers, as club co-founder, the rather aptly-named Simon Fowler, reveals: “Colin is very much loved by our members but as he’s presented to the cyclist who’s been guilty of a ‘cock-up’ on our weekly ride, who then has to take him to work with them as a sign of shame, no one really wants the accolade!” explained Simon.

“Nominations for the riders to make the most foolish errors are voted for on social media and the culprit then has not only to hang Colin from their handlebars, but also take him everywhere with them that week, snapping as many fun photos as possible” he added.

“He’s been awarded for such cycling no-nos as struggling to fit a tyre after bragging how easy it is and wearing left and right socks on the wrong feet, while not returning Colin the following week also means a £5 fine which goes to charity!

“When I won him for wearing so much hi-vis that they said I looked like a lollipop man, it was a bit embarrassing explaining to my colleagues why I had a toy cockerel perched on my desk but it’s a great talking point and hopefully goes to show that the club, while made up of very keen and competent riders, can still have some fun!” Simon enthused.

Which isn’t to say that they don’t take the sport seriously; last month they raised more than four thousand pounds for Meningitis Now by cycling 200 miles in two days in memory of Jonty, son of Velo member Paul Jarvis, who died of the disease back in 2005 aged just six.

Next month, they’ll be back in their saddles for Cycle4Cynthia, the fundraiser for Northampton’s Cynthia Spencer Hospice and having taken part in the ride for the first time last year, having formed the club only six months earlier, it’s something they’re really looking forward to: “This is the fifteenth year of this annual ride and its themes of fun, fitness and family are really what our club is all about” said Simon.

“Plus there’s barely a member who hasn’t been touched by the amazing work of the hospice in one way or another so doing what we love best - and hopefully pedalling off with the trophy for the biggest team – seems an obvious thing to do!

“Now that would be something to crow about!” he enthused.

Cycle4Cynthia 2018, which is generously supported by headline sponsor EMW Law LLP among other businesses, will take place on Sunday 23rd September at Althorp, by kind permission of The Earl and Countess Spencer, offering 5, 25 and 50 mile routes.

For more information please call the Hospice on 01604 973340 or email info@cycle4cynthia.co.uk or to register online, please visit the ‘Register’ page on this website.

You can also keep up to date with the latest news on the event, please visit and ‘like’ the ride’s and Hospice’s page on Facebook.

Meanwhile for more details on joining Brixworth Velo, including the opportunity to learn more about their monthly rides for those wanting to build their confidence on two wheels, please call Simon on 07980 601861 or find the club on Facebook.