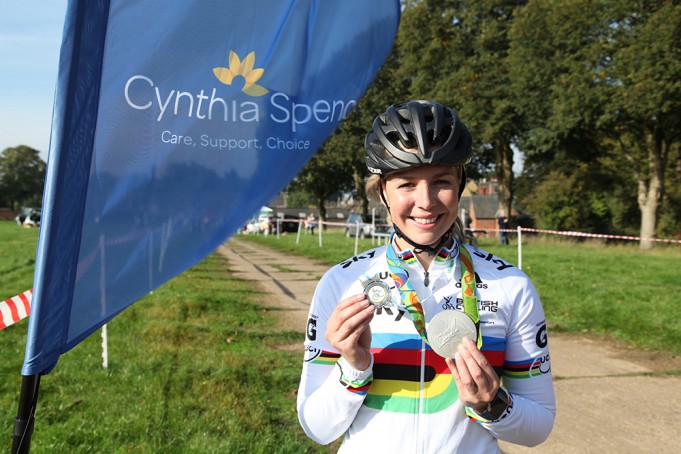 She may have retired from an impressive sporting career last month but double world champion cyclist Becky James has just added arguably the most important medal to her collection – the one hung around her neck for completing Northamptonshire’s favourite fundraising bike ride, Cycle4Cynthia!

After setting off an incredible 1115 riders taking part in the event held at Lamport Hall on Sunday (24th September) in aid of Northampton’s Cynthia Spencer Hospice, the Welsh wonder, who also picked up two silvers at the Rio Olympics, then pedalled the five mile route to show her support for the cause.

And the former track cyclist, who now lives in the county with her partner, Saints winger George North, was thrilled to share the joy of the event with George’s sister, Hayley Cushing, who joined her on a tandem generously loaned by Leisure Lakes Bikes in Daventry.

Speaking after collecting her finishers’ medal, presented to everyone completing the 5, 25 or 50 mile routes, Becky revealed her long-standing interest in the event: “I heard about Cycle4Cynthia some years ago but of course my professional commitments meant I was never able to take part, so I’m thrilled that I’ve been able to do so this year and finally get to experience the fun of this amazing day” explained Becky.

“I visited the hospice earlier this year and seeing the incredible care they offer to their patients and families was just so inspirational, so to be here today and join all these other riders in supporting the charity has been fabulous!” she enthused.

Little could Becky have known that, among those taking part was a rider who, twenty years earlier, might have given her a run for her money! Maxine Johnson, 56, was National Road Race champion and Commonwealth bronze medallist in the Team Time Trial back in 1994 and was one of those pedalling in the colours of the county’s newest cycling clubs, Brixworth Velo.

Also leaping into their saddle was 83-year-old Peter Smith from Northampton who, having completed the 50 mile route for the previous ten years, had decided that the middle distance was more than enough this time: “My wife Ann passed away at the hospice in 2010, having previously worked in its café as a volunteer, so I will always do what I can to help and will hopefully be completing the twenty-five miles for many years to come” pledged Peter.

Meanwhile for one quartet, Mel, Doug, his son Bret and future daughter-in-law Emma, memories of the Hospice’s amazing care were all the more recent, as Mel explained; “Our very dear friend Martin Perry passed away there in April this year after a battle with kidney cancer and so we wanted to be here today to ride in his memory.

“It’s obviously been an emotional day, especially as I’ve done the ride on Martin’s bike, but it’s also been a happy one, remembering the good times we shared and having chance to give a little something back to the place that gave him such amazing care in his final days” Mel added.

Speaking at the end of the ride, which was blessed with glorious weather, the Hospice’s fundraising manager John Helm offered his appreciation to all those who’d been involved: “The sun shines on the righteous they say and that can’t be more appropriate than today, given the kindness and generosity of all of those who’ve turned out in support of the charity” said John.

“So I want to say a massive thank you to everyone, including our team of marshals and volunteers, those who cheered out in the villages and of course to the cyclists themselves who, alongside Becky, have made this another Cycle4Cynthia to remember!” he added.

It will be some time before it is known if the 2016 total of £76,000 has been bettered but for now, riders are kindly encouraged to collect their sponsorship money as quickly as possible and deliver or send it to Cynthia Spencer Hospice, Manfield Campus, Kettering Road, Northampton NN3 6NP, making cheques payable to ‘Cycle4Cynthia’.

Photos from the event will shortly be on the gallery page of this website – and on the ride’s Facebook page. Meanwhile to pledge your sponsorship or support for next year’s ride, or to show your continuing support for the event by purchasing a C4C cycling jersey priced at £25, please visit http://www.ebay.co.uk/itm/Cynthia-Spencer-039-s-Cycle-4-Cynthia-Cycling-Jerseys-Charity-/232432899749