Sports stars in a spin for virtual ride! 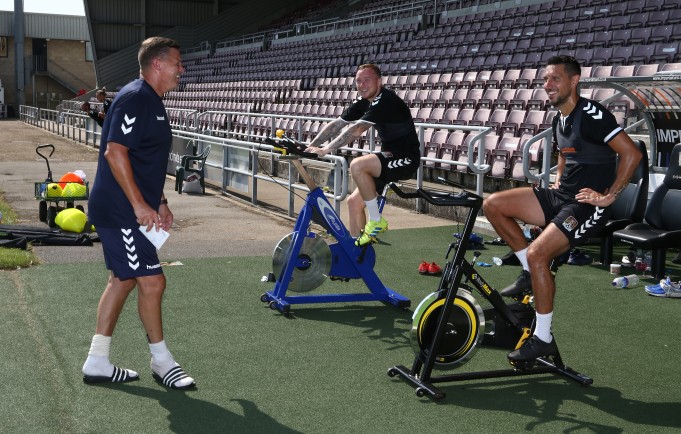 Northamptonshire’s favourite annual fundraising bike ride, Cycle4Cynthia, may not be going ahead this weekend as was originally planned, but there are plenty of silver linings to this particular cycling cloud!

You see, the Covid-induced cancellation of the mass event at Lamport Hall, with riders instead being offered the chance to show their support for Northampton’s Cynthia Spencer Hospice by cycling anywhere, anytime and indeed anyhow throughout the month of September, means players at Northampton Saints – whose Champions Cup quarter-final against Exeter on Sunday would have prevented their pedalling – are getting involved!

The club, which hosted the ride in its early years, has seen a number of first team members leap into the saddles of their static bikes to demonstrate their backing for the charity event, including Harry Mallinder and James Grayson, who respectively opened the last two years’ rides, and England’s Six Nations full-back, George Furbank.

Meanwhile, not to be outdone by their sporting neighbours, stars of newly-promoted Northampton Town have also been getting in a spin in aid of this most deserving of causes, with club captain Nicky Adams and defender Joe Martin among those to endorse Cynthia Spencer and its bid to fundraise over £1m needed every year to help provide unrivalled, specialist end-of-life palliative care for its patients as well as vital support for their families.

For Hospice fundraising manager John Helm, having the county’s sports stars on board is a massive boost in what has been a difficult year: “The decision to cancel our usual annual gathering for the safety of all those involved was not taken lightly, but we’re thrilled that, in making it a month-long, virtual ride, some of our top sportsmen have been able to participate in their own unique way” explained John.

“With half of the month still to go, there’s plenty of time for those with two wheels to follow suit and ride our routes when they wish or create their own route in their neighbourhood, which will hopefully go to recouping some of the quarter of a million pounds we’ve lost this year because of the absence of so many of our fundraising activities.

“Of course the other benefit of this change of plan is a rather selfish one, because instead of me and my team fretting over how a poor weather forecast might affect our turnout, it really doesn’t matter whether it’s raining, hailing or sleeting on Sunday, as riders can simply just pick a different day to pedal!” he enthused.

Cycle4Cynthia, again being sponsored by leading commercial law firm EMW, has swelled the Hospice’s coffers by more than £600k over the last 16 years, and more recently has also helped to fund its Wellbeing service, which aims to help those with a life-limiting illness to live their life as fully as they can by helping to maintain their physical function and independence for as long as possible.

Entry is now £10 for adults, £5 for children and £25 for families and all riders will still receive their Cycle4Cynthia medal, generously sponsored by lettings and sales agent, Chelton Brown, regardless of when and where they choose to ride.

To enter this year’s virtual Cycle4Cynthia, please visit the ‘register’ page of this website, while you can keep up to date with latest news by liking the ride’s and Hospice’s pages on Facebook.

All those signing up are politely informed that Lamport Hall will be closed this Sunday, so there will be no on-the-day registration, no parking, no other facilities available, nor indeed any marshals or pitstops. In addition, the planned 5 mile route, which would have necessitated a road closure, is not being offered but instead riders choosing that distance can cycle their own route closer to home.

Having completed their ride, participants are also encouraged to post photos of their wearing their medal on the ride’s social media platforms - @cycle4cynthia – in the hope of creating a celebratory online gallery at the end of the month.

Meanwhile for further information, including details of the various ways in which you can support the Hospice during these challenging times, please call the fundraising team on 01604 973340 or email fundraising@cynthiaspencer.co.uk