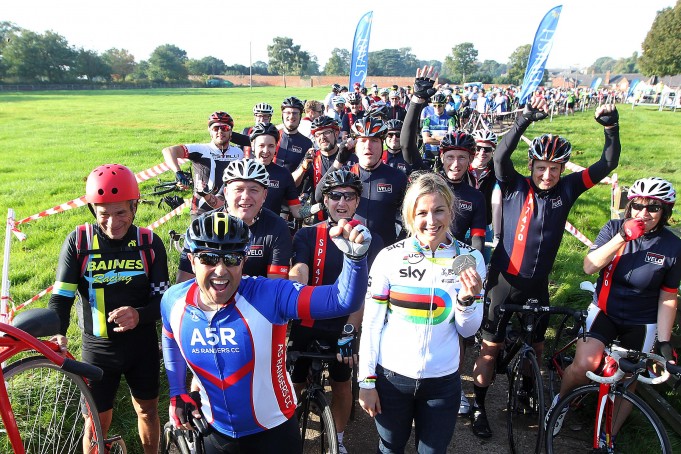 Northamptonshire’s favourite fundraising bike ride may have suffered a small proverbial puncture, but it’s hoped that cyclists will still turn out in force in support of arguably the county’s most deserving cause.

Cycle4Cynthia, the annual event which has raised almost £600k for Cynthia Spencer Hospice in its sixteen-year history, was due to take place at Lamport Hall on Sunday 20th

September but, following latest government guidelines, the centralised event will not now go ahead.

Instead, riders are encouraged to pay their entry fee as usual but pedal their own ‘virtual Cycle4Cynthia’ any time during September, something which the Hospice’s fundraising manager John Helm hopes will in fact enable even more people to get involved this year: “We were really sorry to have to take this difficult decision because we know how much people enjoy coming together for what is always an impressive display of lycra and love for the Hospice, but the health and safety of our cyclists must come first” explained John.

“However, the silver lining to this particular cloud is that we’re designating September as Cycle4Cynthia month, giving those who might previously have been unable to join us on the on 20th or who were perhaps wary of being part of a mass gathering the flexibility to do the ride at their convenience and wherever they choose.

“What that means is that we hope the county’s roads will be overflowing – safely of course – with hundreds of cyclists throughout September and look forward to seeing the many photos of the various locations that have been pedalled, which we’re hoping they will share on our social media platforms once they’ve completed their own ride” he added.

“The other bonus is a rather personal one in that, having watched riders have such a great day for the twelve years that I’ve been brandishing my event director clipboard, I can now put my money where my mouth is and actually jump into the saddle and ride myself!” John enthused.

Among those to show its continuing support for the event despite the change of plan is leading commercial law firm EMW which, in acting as headline sponsor for its third year, is demonstrating the kind of commitment that the Hospice needs more than ever, as CEO Joy Vollans reveals: “We’ve taken part in the ride for several years so, while we’re sorry that it won’t be quite the same this year, we completely understand the reason behind offering this more than happy compromise and are looking forward to getting on our bikes to show our support nonetheless” explained Joy.

“Crucially, we invite anyone with two wheels to sign up and give, what is in essence, a much-needed donation to the Hospice and, as the team estimates that its financial reserves are down by almost quarter of a million pounds over the last six months because of the COVID effect on their fundraising activities, we know that will be even more gratefully received” she added.

Proceeds from this year’s virtual Cycle4Cynthia will help to fund not only the Hospice’s specialist end-of-life palliative care for its patients and vital support for their families, but also its Wellbeing service, which aims to help those with a life-limiting illness to live their life as fully as they can by helping to maintain their physical function and independence for as long as possible.

Entry is now £10 for adults, £5 for children and £25 for families, while those who have already registered will be contacted with details of the change of format. All entrants will receive the GPX codes for the original 25 and 50 mile distances, should they wish to start their ride at any point along those routes, in their registration pack, alongside their Cycle4Cynthia medal, which is again generously sponsored by lettings and sales agent, Chelton Brown. However, anyone considering following those routes is advised that Lamport Hall will be closed, so there will be no on-the-day registration, no parking, no other facilities available, nor indeed any marshals or pitstops. In addition, the planned 5 mile route, which would have necessitated a road closure, is not being offered.

Finally, having completed their ride, participants are encouraged to post photos of their wearing their medal on the ride’s social media platforms - @cycle4cynthia – in the hope of creating a celebratory online gallery at the end of September.

To enter this year’s virtual Cycle4Cynthia online, please visit the ‘register’ page of this website, while you can keep up to date with latest news by liking the ride’s and Hospice’s pages on Facebook.

Meanwhile for further information, including details of the various ways in which you can support the Hospice during these challenging times, please call the fundraising team on 01604 973340 or email fundraising@cynthiaspencer.co.uk